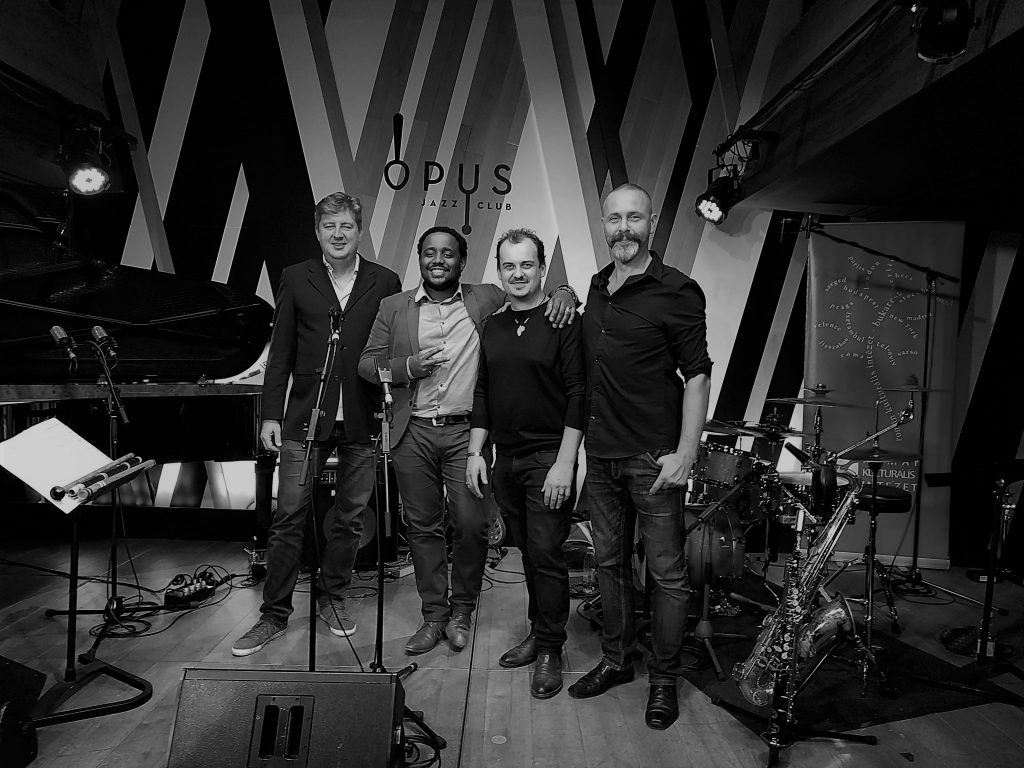 Balkumba Tribe’s journey started in the year of 2014 being founded at the initiative of ​​Lucian Nagy.

Thru this new project, Lucian Nagy is composing and exploring new music of his own, offering as well the chance to all the other members from the Tribe to express themselves and to bring new ideas thru their own compositions too. The first internationally appearence happened in Berlin 2014 thru a concert organised by the Romanian Cultural Institute. Balkumba Tribe’s music has a fresh and original feeling built on a multifaceted spectrum of influences.

A harmonious gathering and a multicoloured combination of styles where typical Balkan Middle East and Indo-African inflections are naturally fused together.

In these years the Tribe has performed in countries such as: Romania, Hungary, Germany, Austria…

In 2015-2016 the Tribe performed in festivals such as: American Music Festival from Arad, Fete de la Musique Festival from Timisoara, Bucharest Jazz Festival, Porgy & Bess Jazz Club from Wien, Budapest Jazz Club… On all this period the Tribe promised to take the message of this musical movement straight to the souls and minds of the people all over the places where they will perform.

The Tribe Members are:

Born in Arad. He graduated the high school of music ”Sabin Dragoi” at the clarinet section and the Music University of Jazz “Richard Oschanitzky” from Timisoara at the saxophone section. He took saxophone master classes in NY with Bob Franceschini & afro-latin/ brazilian music master classes in Los Angeles with PauldeCastro. He is always in constant exploration and discovery of new sub-genres in music that soon or later will define his own voice in this vast world of Music.

An active pianist in the spectrum of jazz/world music on the scene of music in Serbia. He’s the actual pianist of the National Big Band from Beograd. A very versatile musician that has played with great jazz musicians on his career as pianist.

Born in 1983 in the middle of the Indian Ocean, on Reunion Island, the culture and musical sensibilities of Johann Berby are a reflection of his origins: Indian, Malagasy and Mozambican.

which holds within it all the richness of the civilisation from whence it came.

Johann Berby began electric bass at the age of 16.

Has studied music since the age of 5, and started drumming at 7. During the 30 years that has passed since then, he has played in highly diverse musical environments: as a jazz drummer, Latin percussionist and session musician in classical concerts, contemporary and cross-over productions, pop and theatre.

Apart from being a musician, Csaba is also a teacher, having received his teacher’s diploma from the prestigious Franz Liszt Academy of Music, Budapest. He teaches at the Vienna Conservatory, Budapest, and also at the Béni Egressy High School of Music.

Since 1995 he has worked on a wide range of different projects with musicians from very diverse backgrounds.

One of the leaders of the next generation of up-and-coming jazz pianists and composers on the Romanian music scene. He started his musical journey in his home town Timisoara, Romania where he began playing the piano at age 5 and then took up the study of jazz while attending the National College of Arts Ion Vidu.

After college, he started shifting his playing and compositional directions towards a more modern edge with Latin Jazz and Funk projects and gigs.

Regarded as one of the most versatile tabla players of his generation, he is a worthy disciple of renowned tabla maestro Pandit Shankar Ghosh. His cosmopolitan nature and love for experiments have led him to collaborate accross the globe with famous artists.

Not only a sought after performer, Prabhu is also an experienced pedagogue sharing his musical vision on various percussion masterclasses and international music seminars.

Multi-instrumentalist composer, arranger and educator Neil Yates studied music at Salford University and Guildhall School of Music and Drama in London. He stepped out into the professional music business in 1991, as a London-based jazz trumpeter.

Nominated as BEST JAZZ at the Orange County Music Awards 2008.

“Our Tribe for Africa”

Starting with December 2016, Lucian Nagy met Alex Steele http://www.improwise.co.uk/ ( Director Improwise, consultant, educator, coach, jazz pianist, professor, innovation, leadership, change, community development, sustainability, improvisation) and after 2 concerts in wich they ve collaborated thru Improwise concept for the corporatist world, Lucian Nagy came with the idea of getting Balkumba Tribe to be involved in several projects that Alex initiated for charity causes in Africa, in regions such as: Uganda, Kenya, Senegal. Therefore, we are inviting everyone who wants to serve our charity causes to follow this page and the links bellow thru wich by buying the Tribe’s New single entitled “The African M’Ganga” or by pressing the button Donate and offer more than 10 euros they will add more than a hope for the causes that we will try to save.

Here’s the link thru wich you can purchase the New single of the Tribe. For the 1st 1000 persons who will purchase and donate more than 10 euros ( even in bitcoin as value … for wich reason you should contact Lucian via https://www.facebook.com/balkumbero to exchange the bictoin wallets for the transactions) will receive as a free Gift our brand new album entitled “State of Soul” :

We sincerely thank everyone for their involvement.

We’re wishing you all a Blessed Time on this precious place named, Earth = Heart.

Our Tribe’s New album, entitled “State of Soul” has been released

You can listen NOW our album, directly through browsing or using the Musicoin App from your phone playstore section. Here’s the link.

Subscribe to my Vibravid Channel through the link bellow and Click Play on my Videos. Enjoy the music.