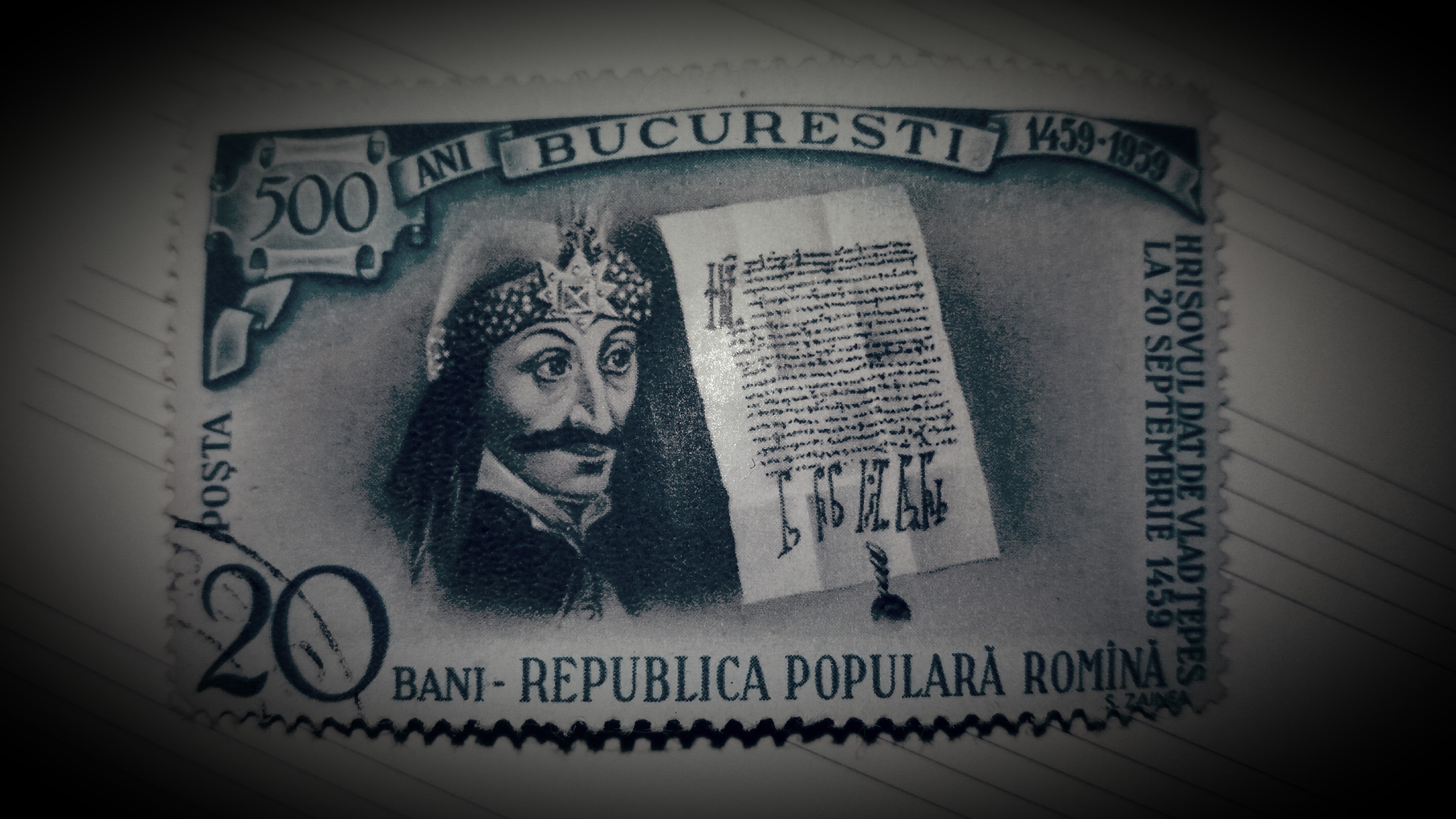 Everything started after i’ve discovered this mark-stamp above, lost somewhere in Time … Maybe some of you will ask … “Does he has this in original?” Is this relevant?

I like the fact that people relates Romania as well to the figure from that mark-stamp… as a start for our story about stamp/postal mark and a lil’bit historical itinerary of this amazing achievement in time of the postal spectrum, expecially in the area where i’m coming from … related with the Dacic Empire and the Roman Empire as well.

So … here we start our short journey … back in Time …

Prior to the Roman conquest, natural roads, especially along the rivers, ensured the important links across Dacia. The Romans expanded and in Dacia they conquered their roads, and alongside them a whole network of post offices was built as in the rest of the empire.

After a long period of extinction of any post office under the oppression of migrations, with the birth of more important state bands and the establishment of new contacts with the neighbors, with the creation of a more intense and stable economic life, links were established through couriers who were in the exclusive service of the rule of those times.

In Moldova, the main routes were from Iasi to Galati, and from there either on the Danube River or on land, at Istanbul.

The post was also very well organized in Transylvania and in Banat, Brasov, Cluj, Sibiu and Timisoara, being some of the most important handicraft centers with extensive relations in South-Eastern Europe, thus enjoying perfectly organized postal links.

In 1857 the state monopoly on postal items was established in Moldova. On November 10, 1857, the government redeemed Theodor Ghica concession of the “contraction” of the beds, an example that would be followed later by the Romanian Wallachia. On July 15, 1857, the first adhesive labels “head of ox” were put into circulation. After the Union of the Romanian Principalities on June 26, 1862, the “United Principalities” marks were issued that would have the power to circulate in both Principalities. In January 1865, for the first time on the postage stamp, the first inscription, which was to remain the mark of Romania, “Posta Romana”, a sign that would have been a precursor for the full state independence that was to be accomplished, will appear for the first time.

In Transylvania and Banat, then under Habsburg rule, the adhesive mark was introduced with the rest of the Empire in 1850, posting under Roman rule following the Great Union in 1918.

If under this angle of postal history and the pre-philatelic period is an integral part of philately, one of the most important cotes that led to the birth of our stamp collecting passion was the appearance of the postage stamp. A big question will remain somewhat in the air, and we have to elucidate this confusion, which consists of, what is the correct name in Romanian, the mark or the stamp?

On the day that the tolling was introduced, there were fixed fiscal stamps in Moldova, printed and embossed on the same sheet for the drafting of documents and contracts. These stamps bear the inscription of “princely stamp” bearing the coat of arms of Moldova and the amount of the tax. As I said, they were only fiscal, the word “stamp” having only that fiscal meaning.

If this “stamp” neologism had French origin, the word “mark” originated in “Marke” Briefmarke in German. Knowing that the post of Moldova had technical counselor von Manowarda, whose origin was from the Austrian post, the use of this terminology called “mark” is explained in full.

From that time, the term “mark” is used in the current postal language, since the term “stamp” has a fiscal meaning.

Why i’ve wrote this whole blog about stamp versus mark?

Was wondering if in the very next Future these terms will be implemented in the cryptonian world to indentify in a much more traditional way the crypto-coins. I know that each coin has its own design in a virtual way but maybe at some point everything will get back thru some bitshares 🙂 that will consist in paper as well. I would love to see each product, coin, shares, musicoins to have an unique mark … like the so called seal that an artist has to sign his compositions. As you saw, everything started after i’ve discovered that very special mark-stamp with Dracula and also this newspaper which is the most expensive newspaper in the world: a newspaper with five postal marks “Porto Gazeta”

Thanks for reading my blog. More things to come soon. I think Romania has some interesting history even in this spectrum of postal marks and stamps.